What is the best portable record player?

I’ve been a skeptic of portable record players.

But when a friend suggested a vinyl night, it changed my opinion. As a vinyl enthusiast, I supplied the record player.

Having unwired speakers and preamp, not to mention carrying a heavy record player from A to B, I realized, maybe there’s a place for portable turntables after all.

Of course, they won’t have the same performance levels as top-of-the-range turntables, but they’re affordable, take up little space, and are (as the name suggests)… portable.

So having tried a few out, I’ll show my findings in this article. Here you’ll find honest reviews of the best portable record players available today.

The 6 Best Portable Record Players in 2022

No audiophile will associate portable turntables and high quality audio.

Even though to an extent it’s true, the Music Public Kingdom Record Player has a feature that sets it apart from the crowd.

So, when I found a portable turntable with an AT3600L Moving Magnet Cartridge, it came as a surprise.

AT is short for Audio Technica and they create high-end turntable parts. Although the AT3600L isn’t the finest in the Audio Technica range, it beats cheap stock cartridges.

While mentioning the AT3600L, we shouldn’t overlook the Crosley Anthology, which comes complete with the same cartridge.

Anyway, back on the Music Public Kingdom, you’ll find the tonearm isn’t as flimsy as other portable record players too. Robust, it has ample weight making for smooth playback.

So where’s it not so good?

The clasp that holds the tonearm in place is fragile. And, as a portable record player, a handle would have made it more transportable.

If you want bells and whistles, it isn’t for you, but for sound quality alone, few portable players come close.

The knobs are of solid metal, the felt matt cushions vinyl and there’s even a vinyl cleaning kit included.

As an entry-level turntable, it does the simple things well. You can play from a smartphone using the BlueTooth connection, but with the AT3600L cartridge, this player is at its strongest spinning vinyl.

The RCA output provides the ability to add a top pair of speakers. Do this and you’re on your way to a killer beginner setup.

If you seek portability and versatility, the GPO Ambassador is a brilliant choice.

Briefcase style with a sturdy handle, you can transport in style. For such an affordable player, the leatherette binding and brass hardware look stylish.

A unique selling point is a rechargeable battery. So not only play via the mains, you can charge it, and play outside. The charge lasts for around 2 1/2 hours. While not a huge amount, it’s enough to give your favorite album a spin when out in the sun.

Of course, an upgrade in speakers will make a world of difference. If you opt for an upgrade, you’re not short of options because there’s BlueTooth and analog output.

But, priced around $100, you’ll have to expect cost-cutting.

There’s an auto-stop feature, however, the button to turn it on is cheap plastic and doesn’t give you much faith in the build quality. Plastic parts are an unfortunate theme throughout.

Although not the most robust record player, the GPO Ambassador is for casual listening. So, if you have a few vinyl records you want to put into action or want occasional vinyl listening on the go, it’ll suit your needs.

The standout feature is the ease of recording vinyl to MP3 format. There’s a USB port and GPO have even included a USB stick. This is where it excels, so for anyone wanting to digitize old vinyl, go for the GPO Ambassador.

Crosley record players endure animosity from vinyl aficionados. But for balance, once I’ve got my tin hat on, I’ll defend them.

Obvs, I’m not going to say the Crosley Executive Deluxe will compete with something like a Rega Planar 1, yet I will say they make good affordable entry-level turntables.

For someone starting their vinyl journey, you don’t want to throw thousands of dollars at a setup. So if you want to listen to the odd vinyl every few weeks, then here’s a good start.

The Crosley Executive Deluxe is pleasing to the eye, so for those vinyl nights, it’s the ideal companion to impress guests.

Sure, the built-in speakers project brittle audio, but budget in a pair of external speakers, and vinyl night will be rocking. Or, if you own some headphones, you can have some reflective downtime with vinyl.

Yeah, when you become hooked, you’ll need an upgrade. Nevertheless, for now, as you dip your toes into the wonderful world of vinyl, the Crosley Executive Deluxe is enough.

Here’s the thing: turntables have different uses and the portable turntables on the list will fall to pieces if you attempt to scratch.

Compact and with battery power, it makes practicing scratching possible wherever you are. With a protective cover and handle, it’ll travel in any scenario.

The Scratch Slide Switch control is the jewel in the crown, enabling scratching techniques easy to perform. It’s like Numark considers every eventuality.

I love the fact you can plug in a phone using the aux lead. This allows you to play a beat through the built-in single speaker and scratch over the top.

Anything that you need to know?

While it will accommodate 33” vinyl, the scratching seems more at home with 45s. 33″ vinyl protrudes from the side of the player, so it becomes a little uncomfortable to play.

While there’s no stereo built-in speaker system, it offers so much in the way of performance. For any DJ or scratching beginner that wants to practice on the go, this is your portable turntable.

For the sheer amount of options, the DIGITNOW Record player delivers.

Let’s start with the basics. It’ll spin every vinyl size. Whether it is 12″, 10″, or 7″, it’ll play them all. And, if you want to digitize that precious old vinyl, you can record to MP3 on either a USB stick or SD card.

There’s an Aux-in cable to connect other sources and BlueTooth to stream from your smartphone. Like many portable turntables, although the built-in speakers won’t cut it, the RCA offers an opportunity to upgrade with external speakers.

While these features seem familiar to portable turntables, here are the unique selling points. The SD card and USB ports also play MP3 files. So, load an SD card full of your favorite tunes and enjoy.

The LED on the front of the system allows you to navigate through tracks. These buttons also let you skip through FM radio channels. That’s right, you can also play FM radio. A scan feature would’ve upped its performance but let’s not be too picky, look at the under $60 price!

So this is the bells and whistles choice. It’s affordable and allows for music playback for different occasions.

While the flimsy tonearm and below-par stylus isn’t peak performance. The sheer amount of playback options makes it a good entry-level player for any listener who doesn’t use vinyl as their primary listening source.

Priced under $40, this player is cheaper than some vinyl records! Seems too good to be true?

For affordability, you won’t find a cheaper turntable. Although you’ll save a few bucks, is it any good?

By now, you’ll understand that a portable record player won’t offer the best sound quality. Furthermore, a budget one at this price, you’ll have to expect issues.

Now you know not to expect a prime turntable, I have to say, as an entry-level turntable, it does the job.

I enjoy the number of color options. With 39 unique designs, ranging from plain colors to a Union Jack, there’s a design for everyone.

Have I spun my most treasured vinyl on it? Yeah, I have.

Would I frequently spin my said treasure vinyl on it? Probably not.

I don’t trust the stylus and like most portable record players, it’s without a counterweight. So, the needle doesn’t drop for optimal tracking. And; the speakers are poor with little weight in bass which takes away from the listening experience.

This isn’t an audiophiles turntable, but for all its faults, this vinyl player is a sound pick for beginners. We all start our vinyl journey somewhere, and for those early inquisitive days of spinning, it’s ideal.

What is a portable record player?

Portable record players are much more compact and convenient than a standard-sized player. They’re sometimes known as suitcase turntables because they collapse into a briefcase-like package with a handle. Once collapsed, they become super transportable. So portable record players bring the joys of vinyl to on-the-go listening in gardens, patios or any scenario where it’d be otherwise difficult.

Crosley record players, like many portable players, come equipped with cheap styluses. So, they’ll wear and damage vinyl records faster than high-performance turntables. However, it’s a long process, so for short-term casual listening, Crosley record players won’t cause damage. Yet, for prolonged use, it’s advised to upgrade to a better turntable.

But vinyl records are awesome, and with vinyl sales reaching a thirty-year high in 2021, the world is waking up to the fact. So why wouldn’t you want to share the joys on a beach or take your system around friends?

And you’ll have many options.

For the budget hunter, there’s the Victrola Bluetooth Suitcase. Priced under $40, you’d be lucky to find a cheaper turntable unless you wanted to rummage through thrift stores that is.

For everything from FM radio to BlueTooth, the DIGITNOW Record Player is a versatile option. DIGITNOW has created an affordable and feature-rich record player capable of different playback options.

If you want to digitize your vinyl collection, the GPO Ambassador makes light work of it. Even to the extent, they supply a USB stick. Priced at around $100, it’s a classy portable record player with its leatherette finish.

Although a divisive brand, the Crosley Executive Deluxe both looks the part and will do a job for casual listeners. Not only does it look stylish, but it’s also easier to use with simple dials and controls.

Let’s not forget turntables can be a tool for creativity. So, for anyone who wants to improve their scratching skills, the Numark PT01 Scratch Turntable has features designed for this craft.

Overall, the Music Public Kingdom Record Player takes the crown. Down to the Audio Technica cartridge, it offers more sound quality than others.

Yet, the common theme among portable players is cost-cutting with built-in speakers. For a more professional setup, external speakers are a must!

Want on-the-go vinyl listening? Then that’s where portable record players come in, so take your pick out of these affordable options and let you and your friends revel in the joys of vinyl. 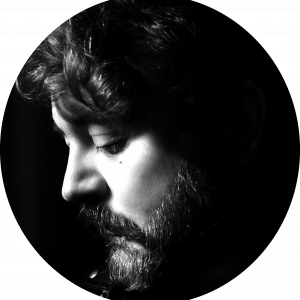 Drawing on over 15 years of experience in the music industry, Neal's writing specializes in all aspects of music. A vinyl enthusiast who's passionate about words---he's at comfort when spinning Cohen. He finds peace traveling, songwriting, and wearing his favorite leather jacket. Keep up to date on Twitter @TheNealSawyer